Tolkien once said “Not all those who wander are lost.” Instead, I’ve discovered the pleasure of finding my own way and shedding some extra baggage as I go. I hope my musings and meanderings inspire you to plan your trip. ~ Bjorn Akselsen
Uncategorized

The only tourists in Egypt

Covid-19 was not a concern two years ago in Egypt. But there were probably just as few tourists then, due to the country’s long political upheaval.

In fact, we felt like we had Cairo and Luxor to ourselves, save, of course, for the 20 million or so living in the largest city in the Arab world. There was a palpable tenseness in the country, as seen through the unprecedented numbers of checkpoints. But it was also in the air. The population may have adapted somewhat to this, but for us, it was a surreal experience.

Arriving in the capital, it was hard to fathom the distances of this megacity. Driving through the vast neighborhoods, it became clear that we couldn’t possibly get to know this complex place in a short visit. Consequently, instead of packing in as much as possible, we cherry-picked neighborhoods and sights to have at least a few immersive experiences.

In my past travels, I have shied away from the more commonly visited places. But avoiding tourist attractions doesn’t work in Egypt — the sites are just too important. On the upside, even if the surrounding sprawl may have disappointed Giza’s views, one can nevertheless not escape the awe and connection with history.

Embracing the many odd expressions of tourism is one way to go when you cannot escape it. So in an attempt to get a break from the history lessons, a Nile “cruise” with a live band and belly dancing sounded like just the right thing. Counter to anything I would have done in the past; the experience was worth it. For good measure, they even sported a whirling dervish number.

Back on the museum track, the Museum of Egypt displays a mindboggling number of the world’s most important artifacts. There’s never enough time to fully appreciate the pieces of art, mummies, canopic jars, and the like on display. A bonus for me was the lack of “dressing” we’ve become so used to in many blockbuster exhibits. While museums the world over try and outdo each other, here, old-fashioned glass boxes, sometimes with a plaque, but often not, were the only accompanying accouterments.

Outside of museums, a great way to become acquainted with a city are visits to its graveyards and religious buildings. In Cairo, we started with Saint Virgin Mary’s Coptic Orthodox Church (better known as the Hanging Church), dating back to the third century CE. While Islam reigns in Egypt, the population is roughly 10% Copts. According to Eusebius, Christianity in Egypt started in the middle of the first century AD. As a minority, Copts are increasingly facing hardships.

First visit to a mosque, we were able to secure entrance under specific conditions.

Established by the Mamluk, the Khan Al Khalili is a famous historic bazaar/souk in the middle of Cairo. It’s an impressive story-book travel in time. The mix between spices, hand-forged metal objects, art/crafts, and mass consumer products can be daunting.

As a graphic artist, the irony of the typography demands attention.

We took the day-train from the Rameses station in Cairo — a 10-hour train journey forbidden for tourists. By decree, we were instead to go on a closely monitored night train with other tourists in the name of security. It escaped us how grouping tourists together in a few train cars would make them safer, and since we wanted to see the country, we decided to find a way to get around the policy. Getting the tickets warrants a blog post itself, but surprisingly, we were able to game the system and never regretted the experience. Traveling by day allowed us to see the views as we followed the Nile.

Being the only tourists on a packed train, we met locals we otherwise would have missed. Some wanting to learn knitting; others proudly displayed their Hookah business.

Arriving in Luxor, we jumped right into the dazzling number of sights. The ancient city of Thebes, Luxor, is the capital of (Upper) Egypt and the city of Amun-Ra. The town, with Karnak and major temples and sights, is fascinating in itself. But the surrounding Necropolises of the Valley of Kings and the Valley of Queens on the other side of the Nile is an experience one will not forget.

On the way to Valley of the Kings, smaller villages in places where conditions seem harsh.

Papers must be in order.

The immensity of the temples, tombs, and sites is difficult to portray in images. A strange aspect of the lack of tourists is that few humans were available to reference the sites’ scale.

Egypt offered a glimpse into a difficult period of both ancient history and contemporary political seismology. One of the more profound takeaways from our stay is the experience of human adaptability and the similarities we all share in periods of uncertainty and stress. The absence of tourists allowed us to discover humans stories as fascinating as the country’s history. 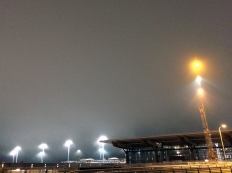